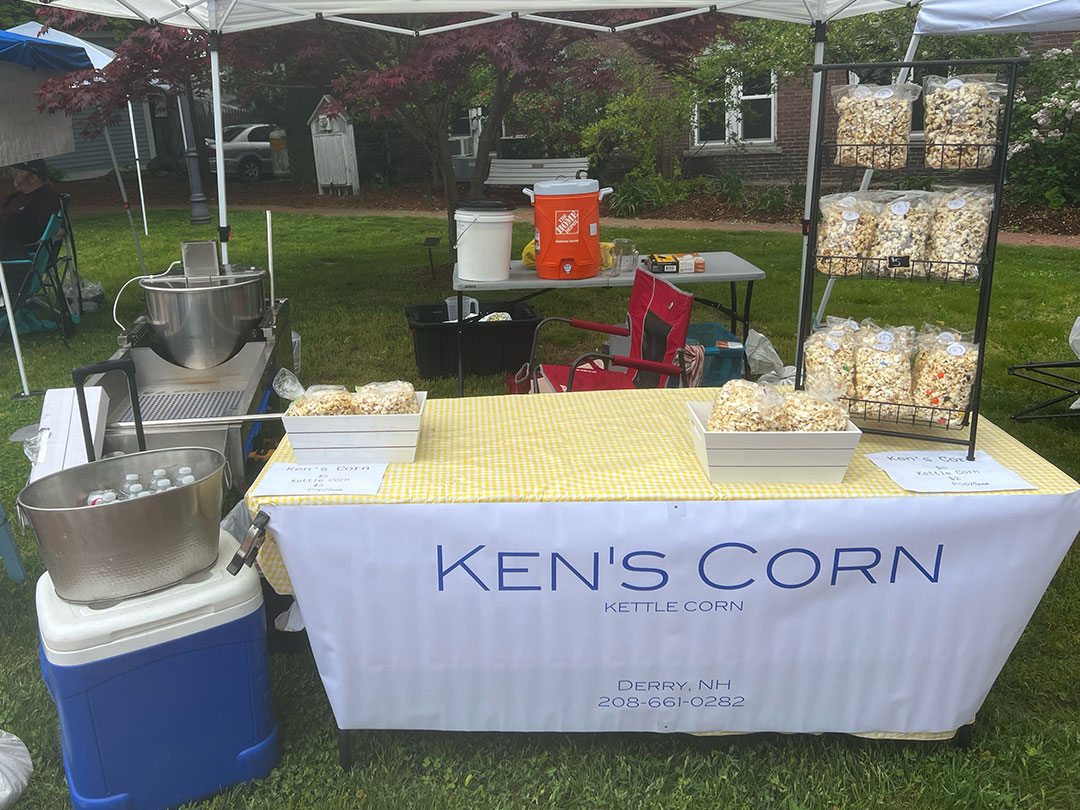 My wife, four kids and two dogs moved here from northern Idaho, by way of Chicago, 3 years ago and currently reside in Derry, NH. We enjoy the area, and it feels and looks like home to us. Three of my kids will be attending Pinkerton Academy next year as a freshman, junior, and senior.

I got into kettle corn due to my love of popcorn and its varieties (i.e. Carmel corn, cheese corn and especially buttered popcorn). Because I make so much of these at home currently, I thought why not try to make some side money doing just that. I have one child trying to obtain his pilot’s license, one child in travel softball and another playing high level hockey. With all the travel, tuition fees and equipment, my family and I needed supplement income to make ends meet and allow the kids to chase their dreams. My youngest is just starting hockey and t ball and is currently in kindergarten. My wife also runs a bakery that you may see around other markets. Between the two of us being vendors, traveling with the kids and all the house duties, we’re an extremely busy family.

I have yet to have obtain a website and I haven’t figured out Facebook yet. I do have an Instagram page called @kenscornnh. My wife is the social media person so she’s working on pages for me. Stay tuned, as more information on those will be developing in the coming weeks.

As a fresh starting business in New Hampshire, we’ve been met with a lot of excitement and friendship in our short time doing farmers markets and have met many friends. We’re hoping to continue our success and meet new people as we travel around selling our products.

You might ask why my company is called Ken’s Corn when my name is Scott. Well, here’s the story:

My middle name is Scott. My first name is Kenneth. I was named after my grandfather and unfortunately disliked that name until his passing, and I appreciated the man he was. I went by Scott due to the numerous Kenneth’s on both sides of my family. When I named the business, I went with Ken’s corn. Yes, because it was “KC” as in “kettle corn” but also because I played college baseball and am a huge baseball fan. George Brett the former third baseman for the Kansas City Royals owned the single-A minor league team in Washington State and northern Idaho where I grew up. He was a local hero. I’m not a Royals fan per say but was a fan of Mr. Brett. Because it has the same initials as Ken’s Corn and Kettle Corn, we wear KC Royals hats as business apparel. Due to trademark issues, I cannot adopt that logo as an official business logo, so we wear it in honor of Ken’s Corn, my grandfather and Mr. Brett and the heritage in which we grew up.